It was contained in SFR40/2015: Provisional destinations of key stage 4 and key stage 5 students in state-funded institutions, 2013/14.

I will not repeat again the detailed description of this data or the provisos attached. The essential information is set out at the beginning of this earlier post. A more exhaustive treatment is provided in the Technical Note published alongside today’s SFR.

Unusually, the main text of the SFR draws attention to some bad news about the proportion of FSM-eligible students progressing to selective higher education:

‘The gap between the percentage of free school meals eligible students going to the top third higher education institutions and all other students has widened from 7 to 9 percentage points between 2010/11 and 2013/14.

For Russell Group institutions the gap has widened from 6 to 7 percentage points.’

The accompanying graph shows that the gap on both of these measures has also widened by one percentage point since AY 2012/13, the previous year for which data was collected.

But one has to poke about in the underlying data to find the real story, which is the continuing failure to increase the proportion of FSM students entering Oxford and Cambridge.

I published a post last March comparing the fair access trends in the destinations data DfE had by then published, covering academic years 2010/11 to 2012/13 inclusive. This brief analysis compares the provisional 2013/14 outcomes with those earlier figures.

The headline is that the number of FSM students admitted to Oxford and Cambridge is STILL stuck on exactly 50, where it has been for three years in succession, since AY 2011/12 (it was 30 in 2010/11).

UPDATE: Final destinations data for 2013/14 was published on 21 January 2016. This CONFIRMS the figure of 50 FSM students progressing to Oxbridge (see Table NA12 in the underlying data)

Yes this is a single metric – and I know all the excuses.

Even so, this desperately low figure is hardly a ringing endorsement of our collective efforts to improve fair access to Oxbridge.

The graph below shows how the number of FSM students admitted to Oxbridge, Russell Group Universities and the top third of HEIs has changed year on year, according to the DfE’s destinations data. 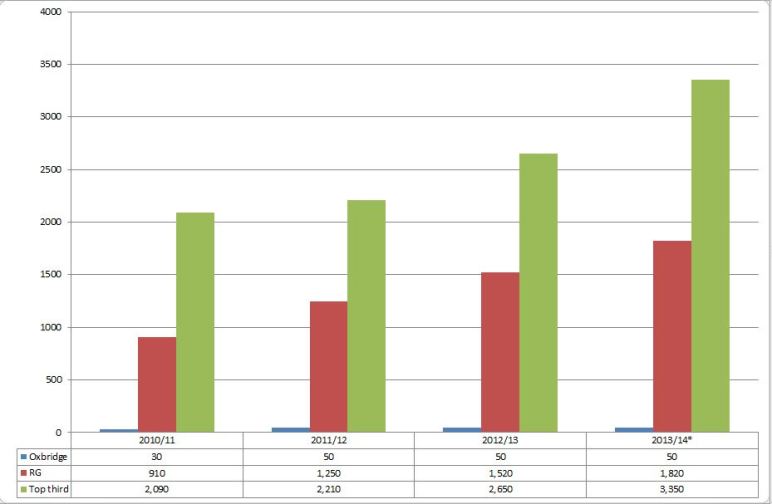 Apart from the headline above, one can see that:

This second graph shows the percentage of all entrants – to Oxbridge, all Russell Group universities, top third institutions and all HE – accounted for by FSM-eligible students. 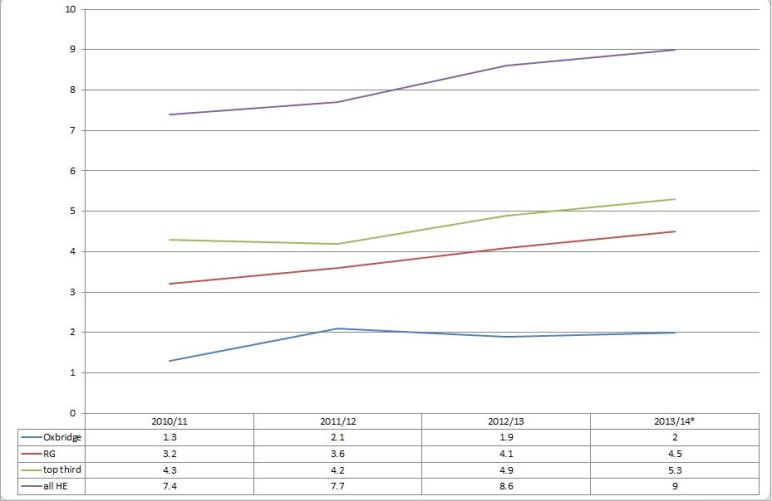 This also illustrates Oxbridge’s failure to improve after an initial jump in AY2011/12.

We wait to see whether the forthcoming HE Green Paper will contain new proposals to address this sorry state of affairs. We should not accept without question assurances that the latest national access strategy will be any more successful than its predecessor in tackling the problem.

The Government might consider proffering more challenge and more support, for we have a right to expect that our leading universities should also be national centres of excellence for fair access.

Given the time-lags attached to this data, some retrospective scrutiny is also necessary. It should not be confined to Offa and Hefce, or to the access programmes at Oxford and Cambridge, both of which have considerable scope for improvement.

Several important third sector organisations, including the likes of the Sutton Trust and Teach First, also need to ask themselves some extremely searching questions about the impact of their work.

2 thoughts on “FSM admissions to Oxbridge STILL showing no improvement”