This post reports five-year trends in the admission of disadvantaged students to selective universities, as revealed by the government’s key stage 5 destinations data.

This half decade coincided almost exactly with the lifetime of a government that was strongly committed to social mobility through higher education. What does the destinations data reveal about the progress it made – and what lessons might be drawn by those of us still striving to make a difference?

The release – Destinations of KS4 and KS5 pupils: 2015 (provisional) – received scant attention from the education commentariat, coinciding as it did with the publication of two other bulletins containing provisional 2016 GCSE and A level results.

But this dataset is about to become very much more significant in the schools and post-16 sectors since destination is a headline measure in the next iteration of the 16-18 performance tables, due for publication in January 2017.

According to the statement of intent the tables will include details of progression to selective higher education destinations, although separate reporting of the destinations of disadvantaged students will not begin until 2018.

Suppression of small numbers – to ensure that data remains anonymised – is bound to compromise severely the impact of this exercise, but the aspiration is worthy even if the implementation fails to match it.

Historically the POLAR-fixated higher education sector has typically disregarded the destinations data, though it really ought to pay a little more attention.

The repatriation of higher education policy to DfE will make some difference, for BIS spearheaded the HE sector’s ‘not invented here’ response.

A point not lost on the UUK’s Social Mobility Advisory Group, which rightly advocates the development of a variegated basket of measures – including measures of household disadvantage – to strengthen cross-sectoral collaboration.

The publication of experimental FSM performance indicators for widening participation (UKPIs) should also help to concentrate minds. But those promised for July 2016 did not materialise – and there is as yet no target date for their eventual appearance.

To give them credit, OFFA did at least acknowledge the publication of this data, though in one of their more anodyne press releases.

‘We are continuing to see good progress towards achieving fair access to higher education. However, I am concerned that these figures show the proportion of disadvantaged students progressing to higher education remaining stubbornly lower than for other students. These statistics are particularly challenging for those universities with the highest entry requirements, where the gap is even wider.’

But is this really accurate?

What more sophisticated messages can we draw from the data?

What changes, if any, are evident since my equivalent post last year?

And what exactly was achieved during this quinquennium?

Nature of the dataset

The new publication is the eighth in the series and the first not to carry an ‘experimental’ tag.

The same pattern will be observed this time round. The revised edition will be published here alongside the performance tables, provisionally on 19 January 2017. The revised version will also include mainstream independent schools, excluded from this analysis.

The new release relates to the destinations of students who completed KS5 in AY2013/14 and who entered higher education in AY2014/15.

It includes students aged 16, 17 or 18 entered for at least one A level or equivalent level 3 qualification. They must record ‘sustained participation’ in higher education throughout the first two terms of the academic year, so from October 2014 to March 2015.

Three measures of HE selectivity are used:

There are now two measures of disadvantage:

Pupil premium was first introduced in 2011 for FSM and looked after children. But in April 2012 the deprivation criterion was extended to all those eligible for and receiving FSM at any point in the last six years (Ever6 FSM).

This should mean that these two measures are also nested, in that every FSM student in Year 11 ought also to be a pupil premium student.

We must also add a relatively small number of looked after children, but no separate figure is provided for the secondary sector, so I have used the 26.7% figure as a proxy for the overall incidence of pupil premium below.

Numbers are rounded to the nearest five, so totals do not always agree and small improvements in small numbers are somewhat inexact. An ‘x’ denotes either one or two students.

‘The gap between the percentage of free school meals eligible students going to the top third higher education institutions and all other students has widened from 7 to 9 percentage points between 2010/11 and 2013/14.

For Russell Group institutions the gap has widened from 6 to 7 percentage points.’

This was accompanied by a graph illustrating the trend, which is not reproduced in the new edition. This confines itself to supplying the 2014/15 percentages for disadvantaged (pupil premium) and other students, so ignoring the FSM measure entirely.

Chart 1, below, reproduces the graph with the addition of the provisional 2014/15 data.

FSM numbers entering selective HE since 2010/11

The headline percentages are of limited value, so I make it a point of principle to dig out the actual student numbers in the underlying data. These are shown in Chart 2.

One immediately obvious piece of good news is that the number of FSM students attending Oxbridge has risen from 50 to 65, after three years stalled on 50.

The rounding renders these figures imprecise but, if we take them at face value, this represents a substantial 30 percentage point improvement.

In fact the data shows that the schools sector supplied 60 students (rounded to the nearest five) and the FE sector supplied a further 10 (also rounded), but when the total is rounded it comes to 65 rather than 70. 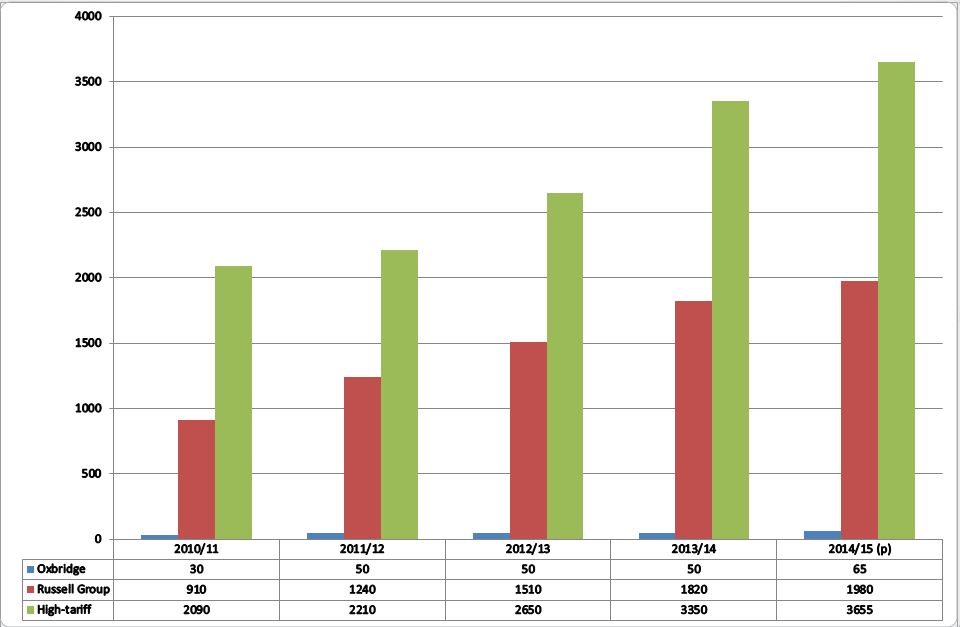 If we take 2010/11 as the baseline, this means that Oxbridge FSM numbers have increased by 117%, almost identical to the increase of 118% for all Russell Group institutions and significantly ahead of the 75% increase at higher tariff institutions.

On the other hand, if 2011/12 is selected as the baseline, Oxbridge registers a 30% improvement, but the Russell Group has an improvement rate of 60%, twice as strong, while higher tariff institutions are a little ahead at 65%…

So beware of misleading claims based on this data.

The abiding point is that the graph now shows all numbers moving in the right direction.

But this improvement may be attributable to overall increases in the number of students admitted, so Chart 3 shows the percentage of all entrants represented by FSM students. 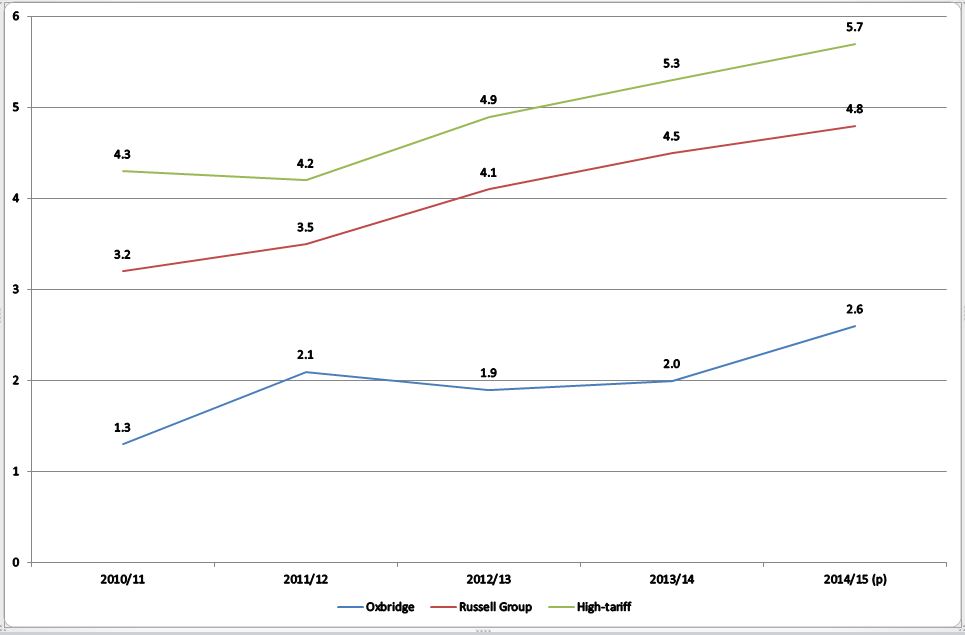 According to this measure:

Overall the lines are all pointing in the right direction, despite a period in the doldrums for Oxbridge, but Oxbridge continues to lag significantly behind the Russell Group as a whole – and there is a smaller yet still significant gap between the Russell Group and all higher tariff institutions.

As noted above, a new measure of disadvantage based on receipt of pupil premium – ‘ever 6’ FSM and looked after children – has been introduced for the first time in 2014/15.

Indeed the main text of the SFR refers to it in preference to the FSM measure:

‘A higher education destination was the most common choice for disadvantaged students (44%) but they were less likely to progress to sustained higher education than other students completing key stage 5 study (49%).

This disparity was greater for more selective higher education institutions. Around 90 disadvantaged students had a sustained destination at Oxford or Cambridge universities in 2014/15.’

So, whereas some 65 FSM students progressed to Oxbridge, 90 pupil premium students did so, almost 40% more, leaving aside the impact of rounding.

The next chart compares FSM and pupil premium numbers for the different measures of higher education selectivity. It shows that the Russell Group took in 63% more pupil premium than FSM students while higher tariff institutions admitted some 61% more.

These differences are broadly in line with the variance between FSM (16%) and pupil premium (26.7%) rates when the bulk of these students were in Year 11. But Oxbridge appears to be under-recruiting.

The percentages of all entrants represented by pupil premium students, relative to the comparable FSM percentages, should provide a more reliable guide.

Some 3.6% of students at Oxbridge received pupil premium in Year 11, compared with 2.6% of FSM students, about 38% more.

If Oxbridge had recruited the same percentage of pupil premium students as all Russell Group institutions it would have taken in some 195, more than double the number it actually recorded.

Another new dimension to the 2014/15 data is a breakdown of destinations according to the admissions policy of the exporting school or college.

The SFR provides a graph showing the percentages of disadvantaged and all other students progressing from six variants – comprehensive, selective, modern and other schools, FE and sixth form colleges – to all HE, higher-tariff and Russell Group institutions.

The version below shows that selective schools are more successful than both comprehensive schools and sixth form colleges at sending disadvantaged students to Russell Group, higher-tariff and all higher education institutions.

This might suggest that grammar schools are not quite as successful as they should be at sending pupil premium students to Russell Group universities. 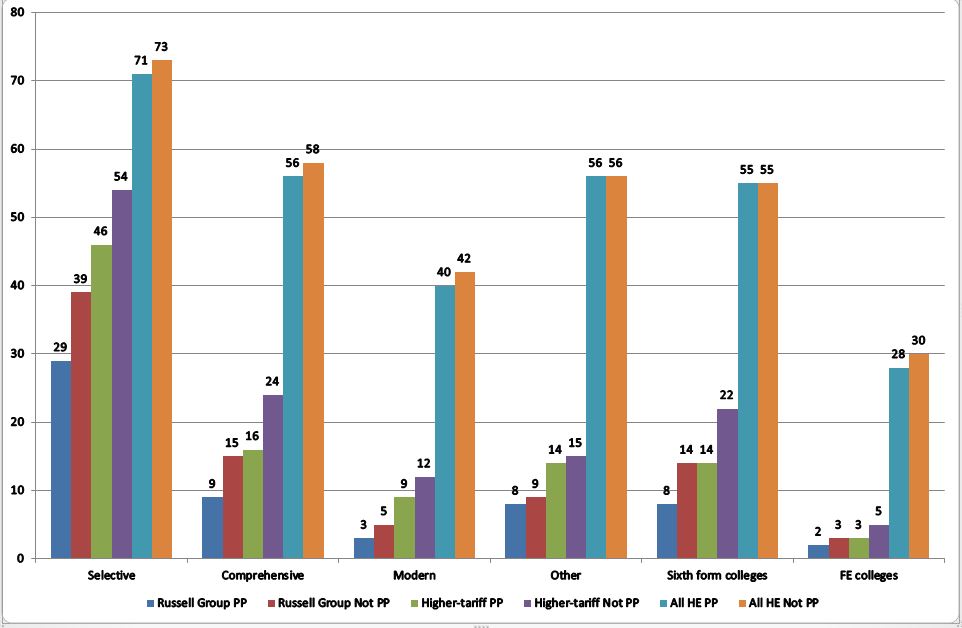 Chart 6: Russell Group, higher tariff and all HE destinations, percentage of pupil premium and other students by institutional admission policy, 2014/15 (provisional)

Percentages progressing to Oxbridge are too small to feature on the chart. Even at selective schools, only 2.3% of the pupil premium cohort is destined for Oxbridge. At comprehensives this falls to below 0.3%.

The three pie charts below shows how the pupil premium populations arriving at Oxbridge, all Russell Group and all higher tariff institutions respectively are distributed according to the admissions policy of their school or college.

The first, for Oxbridge, shows that the majority of the pupil premium population (61%) is drawn from comprehensive schools, with selective schools supplying a further 28%. Since there are only 163 grammar schools, the selective sector is disproportionately successful.

Only a handful of Oxbridge’s pupil premium students are drawn from sixth form colleges and FE colleges, plus the odd one or two from other institutions. None attended modern schools.

Nineteen grammar schools (12%) apparently sent no pupil premium students to Oxbridge. For all other schools the numbers are suppressed.

Grammar schools are still disproportionately successful but they have much more competition.

The underlying institutional data shows that there were 51 schools and colleges from which ten or more pupil premium students progressed to Russell Group institutions.

The final chart, for higher tariff institutions reveals a similar pattern to that for Russell Group institutions. Some 54% of pupil premium students are drawn from comprehensive schools, 22% from sixth form colleges, 13% from FE colleges and less than 9% from selective schools.

There were no selective schools in this sample.

This analysis of the provisional 2014/15 destinations data reveals that:

Overall, there is reason to be cautiously positive about the trends in recruitment of disadvantaged students to Russell Group and higher tariff institutions, but progress is steady rather than spectacular.

The question arises whether steady progress is sufficient, or whether we ought to be more ambitious.

Despite the reformist intentions behind the schools green paper this combination will never deliver anything better than steady incremental improvement. It remains vulnerable to uncooperative heel-dragging by HE institutions. It is also costly and inefficient: each pound expended delivers very little progress.

Three further reforms would add the requisite rocket boosters. I’ve advanced each of these before, but they would work even more powerfully in combination:

One thought on “Advancing by slow degrees”